Already familiar with the Dark Poet Princess’ previous work, I was very much interested in her new effort, which was clearly described by its title, ‘Without the Confines of My Rhymes”. The collection explores not only her venture into free-style poetry, but it also brings us another side of Xtina Marie that wasn’t often shown in her previous work.

The Xtina we have come to know in the past has always been provocative and more than a little naughty, but this work shows that she is also warm, and someone who could use a hug.

Five star from me. 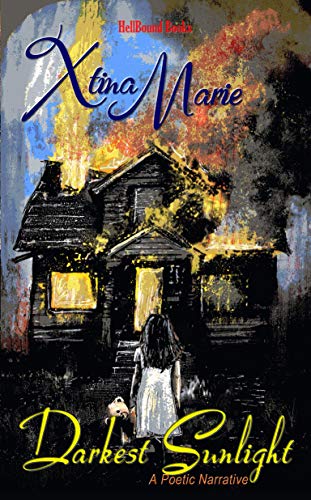 It’s like a mix of her two previous books, and better.

This book is devilishly decadent. The whole thing paints a picture in the mind not unlike Poe.

Xtina cuts us to our core: And THAT is poetry!

“The Perfect Poem Composed,” for instance, showcases Xtina’s gift of light and dark through her graceful use of imagery.

She takes ordinary ideas and brings them to us through historical or literary eyes, creating new meaning, again, making us think and see things that weren’t there the first time we read it. THAT. That is what “good” poetry is!

Xtina Marie is a poet of our times, one that we need to pay attention to. Within the pages of Light Musings, every part of your being will become involved. And yes, you will read these pages again and again.

You will not find poetry that goes deeper into the soul than this!

It breathes everything romance, has one turning the page and wanting more.

Light Musings has become a true work of art.

If you enjoy poetry about love, sex, and the healing of hurts, this is one you’ll want to pick up.

The 1st was a little darker than this, but that don’t mean this is all hearts, flowers and candy. I’m a huge fan of how she writes.

Perhaps readers of Light Musings are testing their limits. While I love every person who takes the time to rate one of my books; I was wowed by this review. Thank you Renier.

A poetic narrative is defined as the following: “A narrative poem includes the necessary elements of storytelling. A short story must include developed characters, and a plot with action, conflict and resolution; so too must a narrative poem.”

However, once I decided to invest in “Dark Musings”, I refused to let go. I read the poem about five times. I needed to fully understand the depth with which Xtina Marie wrote “Dark Musings”.

Not only were there elements of feminine sexuality, Jungian archetypes, and totemic Freudianism, but also nuanced verses juxtaposed against valiant direct social commentary.

One feels arrested by Xtina’s “musings”, as well as trapped by the literary psyche she created.

Existential, nihilistic – at times fatalistic – Xtina manages to circumvent garden variety poetry by using all three of the above philosophical elements. I found myself being drawn to Friedrich Nietzsche’s work at several key points in the poem. Unexpected twists and magnanimous metaphors are inherent in Xtina’s work. This means that her poetry, albeit terrifying and disturbing, creates a narrative which is so subtle that one needs to reread it several times before fully understanding what can only be described as a tour de force.

I also picked up on neo-romanticism during my third reading of the poetic narrative. Xtina abandoned realism several times and forced her work to become fully abstract and devoid of the “noblesse oblige” self-indulgence of modern poets. The perspicuous similes and metaphors give the reader the opportunity to both enjoy and dissect the work on several levels. One could either read Xtina’s poetic narrative without delving into the symbolism, or one could really dig into it and bite off the true nature of this fictional psyche.

It’s potent, powerful and intense. You will feel slightly disturbed at the end. But it’s a good disturbed, a sense of knowing that you just experienced literary art.

“Dark Musings” is interesting and courageous. It could have been a disaster, especially if it were in the hands of someone who is not seasoned enough to carry the magnitude of a narrative poem.

Xtina is seasoned enough. And she knows how to write. Move over, Homer. The Iliad will have to make space for “Dark Musings” on my bookshelf.